"Thou shalt not commit logical fallacies" are the first words you'll see on the website yourlogicalfallacyis.com. Do you know what your logical fallacy is? You will after checking out the cool poster created by Jesse Richardson, Andy Smith and Som Meaden. Here's a snapshot of it: 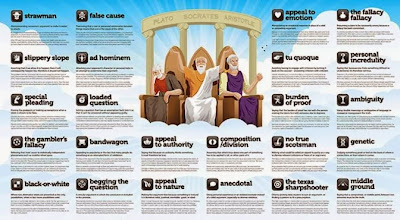 "A logical fallacy is a flaw in reasoning," YourLogicalFallacyIs.com explains. "Logical fallacies are like tricks or illusions of thought, and they're often very sneakily used by politicians and the media to fool people. Don't be fooled! This website has been designed to help you identify and call out dodgy logic wherever it may raise its ugly, incoherent head."

The False Cause fallacy, for example, "presume(s) that a real or perceived relationship between things means that one is the cause of the other." In the Tu Quoque fallacy, "you avoided having to engage with criticism by turning it back on the accuser - you answered criticism with criticism." And for a third example, with the Appeal to Nature fallacy one "argue(s) that because something is 'natural' it is therefore valid, justified, inevitable, good or ideal."

Each logical fallacy named is accompanied by a definition plus an example. Why does this matter? Because logic and reasoning are in very short supply these days. The more we know about the ways in which poor logic leads to deception, the better armed we are to avoid being deceived.

Visit this page to download the poster in one of three sizes, or to have one printed and delivered to you.