Divers Get Seal of Approval from Friendly, Playful Seal Pups

This video was posted to Vimeo by Jason Neilus. He explains the video was shot in the Farne Islands off Northumberland, UK, and "We've been visiting here for the last six years to say hello to the seal pups and we've never had this much interaction before - they were everywhere and all over us!" 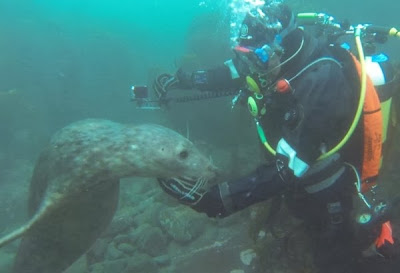 Neilus also informs us that the seals in the videos are pups, only about two months old but they were already around 200 to 300 pounds in weight. "The seals are wild animals and approach the divers entirely by their own choice. No seals are forced to interact or forced to stay," Neilus wrote. "As always once the seals get older and move off to form colonies of their own elsewhere and the majority of them will not see people again. Fully adult seals are rarely this interactive and whilst tolerant of divers they tend to keep away after their first year of diver visits."