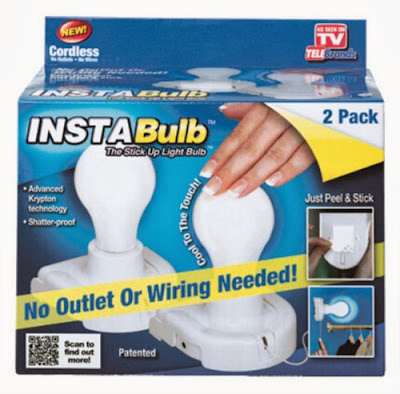 InstaBulb is "the light you can stick anywhere," as the official website puts it. It's a battery-powered bulb with a base that affixes to a wall. Slide the bulb into the base to add light to a dark closet, or lift the bulb out of the base to carry it around. Here is the official commercial:

We bought our InstaBulb package at Walmart, where it cost about $13 for a pack of two. Each bulb runs on four AA batteries, sold separately.

While it looks like a traditional incandescent light bulb in shape, that's not what it is. I'm not sure what the element inside the bulb is, but it doesn't put off nearly as much light as traditional light bulbs. Also, the shatter-resistant bulb is made of some kind of opaque plastic rather than glass.

First, we took one of the bulbs into a dark room and turned it on. It did a poor job of lighting up a room. The effect was about the same as if we had lit a large candle.

However, we then affixed the base to a wall in a small, dark closet (there is a peel-and-stick adhesive on the back of the base). And in that scenario, the InstaBulb performed very well. The amount of light it provided really did make a big difference, and was enough to illuminate the closet to the point where we had no trouble seeing our way around.

For larger closets, you might need to use two InstaBulbs. You should also experiment by holding the InstaBulb at different locations in a closet before affixing the base to the wall, to make sure you choose the spot where the light will be most effective.

We've been using the InstaBulbs we bought for a couple weeks and are quite pleased with their performance in providing light to closets. There are many other stick-up, battery-powered lights out there, and some of those are more traditional lighting that offers much more illumination. So you should shop around and compare prices before buying any of them.

We've also heard that the adhesive on the base can loosen over time, especially if you remove the bulb from the base on a regular basis, or stick an InstaBulb in a hot location. That's an issue.

Overall, we feel the InstaBulb isn't best-suited for lighting rooms, but performs very well in lighting closets or other tighter storage spaces. We give the InstaBulb 3.5 out of 5 stars.

Labels: As Seen On TV