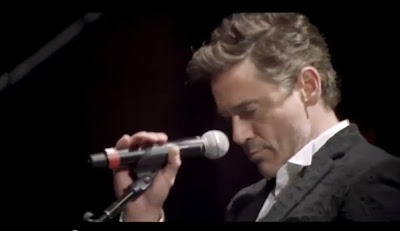 This is a few years old, but it seems to be making the rounds again: Actor Robert Downey Jr. joins rock god Sting on stage and handles most of the vocals on "Driven to Tears."

The performance took place in 2011 at the Beacon Theater in New York, which was where Sting was giving a concert on his 60th birthday. And Sting, as per usual, kills it on bass. That's the genius of Sting - those basslines. (Personally, I find his voice a little grating after about five minutes, which is I love many Police and solo Sting songs, but have always had trouble listening to full Sting albums.)

Is Downey trying to do a Sting impersonation? Sounds like it. As impersonation it's not that impressive. As a vocal performance, it is impressive. But we shouldn't be surprised: Downey is a "published" singer; that is, he's released an album of (mostly) his own compositions. The songs on Downey's 2004 release The Futurist

are described as mostly "pop ballads."

Here is Downey performing the one single from that album (penned by Downey), Man Like Me:

That's not the only professional singing Robert Downey Jr. has done. He's performed songs on the soundtracks of some of his movies, including Chaplin, Two Girls and a Guy, The Singing Detective and Kiss Kiss Bang Bang, among others. And every Christmas, you probably hear Downey on the radio, and probably without realizing it. His performance of Joni Mitchell's River is included on the Ally McBeal Christmas album (yes, there is an Ally McBeal Christmas album). Here is Downey's River vocal: