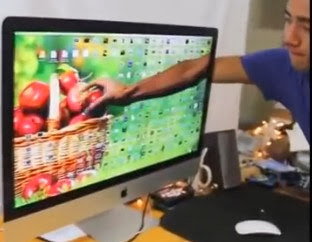 Who is Zach King? He describes himself as "a filmmaker and youtuber." On YouTube he posts videos as FinalCutKing, and on Twitter you can follow him @FinalCutKing.

King also posts on Vine. If you are familiar with Vine then you know a "vine" is a very short (as in seconds long) video clip. There's not much time to do anything. Still, King has managed to produce some of the most popular, inventive Vines out there. Some might call what he does "magic tricks," but it's more illusions that take advantage of the "magic" of video editing.

And now King's Vine illusions (or magic tricks, if you prefer) have been compiled into a longer YouTube clip:

On his YouTube channel, King says of himself: "Shooting sweet vids & tutorials with cool effects. Hope you enjoy and learn a lot! New video every week."

Labels: Miscellaneous Niblets, On the Web