Are you familiar with the "mystery rocks" of Death Valley, the rocks that seemingly move themselves across a long, wide playa called the Racetrack?

The rocks, often called "sliding stones" or simply moving rocks, leave long trails in the dirt in their wake, so visitors can see where the rocks started and the path they traveled. Nobody has seen the rocks actually moving, however.

Alas, it turns out the rocks can be stopped in their tracks by the mere presence of ... footprints. Visitors to Death Valley's Racetrack playa can interrupt the rocks' travels if they step onto the playa when it is wet, leaving behind muddy footprints.

Death Valley National Park recently tweeted: "This is why you should not walk on the Racetrack Playa when it is wet." That tweet linked to the park service's Facebook page and to this image: 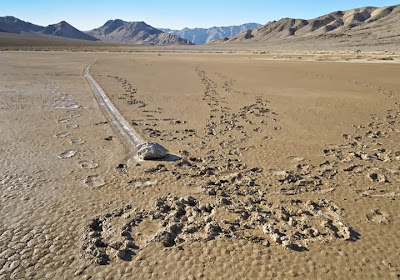 Accompanying the photo, a Death Valley official wrote: "The Racetrack playa is still wet and muddy from winter storms. Your tracks in the mud will disrupt the rocks' strange activity and ruin photos for years. Take only pictures, leave NO footprints."

So it only takes one person's bad decision to stop a Death Valley Racetrack sliding stone and ruin the scene for years to come. Sad.

Here's another photo showing how cool the Racetrack and the trails of its moving stones can look minus the footprints: 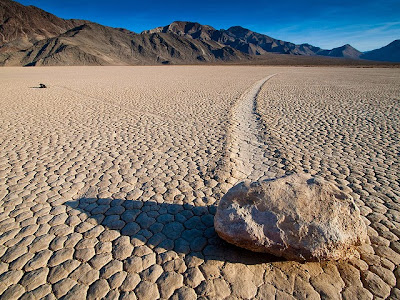 So what is going on here? How do these rocks - some of which weigh hundreds of pounds - move, seemingly under their own power, across the surface of the playa? There are all kinds of woo-woo theories (aliens! energy vortex!). But the truth has to do with the geography, topography and specific weather conditions of the Racetrack playa.

It goes like this: There is often water at one end of the playa. Strong winds drive that water across parts of the (usually dry) rest of the playa at very thin depths. Nights in Death Valley are typically freezing, so the water freezes, and ice forms around rocks. The ice-encased rocks then are dragged across the top of playa by the expanding ice, or blown across by very strong winds, leaving trails in the mud behind.

It was a NASA scientist named Ralph Lorenz who finally figured it out:

Lorenz developed a kitchen-table model — using an ordinary Tupperware container — to show how the rocks might glide across the surface of the lake bed.

"I took a small rock and put it in a piece of Tupperware, and filled it with water so there was an inch of water with a bit of the rock sticking out," Lorenz told Smithsonian.com.

After putting the container in the freezer, Lorenz ended up with a small slab of ice with a rock embedded in it. By placing the ice-bound rock in a large tray of water with sand at the bottom, all he had to do was gently blow on the rock to get it to move across the water.

And as the ice-embedded rock moved, it scraped a trail in the sand at the tray's bottom. Lorenz devised his clever experiment by researching how the buoyancy of ice can cause large rocks, when encased in ice, to move by floating along tidal beaches in the Arctic Sea.

Water being blown across the Racetrack playa was only recently caught on video, by Brian Dunning:

Maybe it won't be long until a camera finally captures one of Death Valley's moving rocks in motion. If there are no footprints in the way.