Super Bowl I: Where It All Began 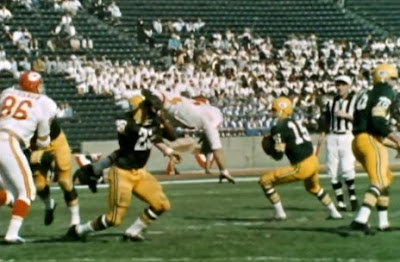 Today is Super Bowl Sunday, which, in the United States, is an unofficial national holiday and is beginning to rival Christmas and Thanksgiving as a day to gather with friends and family.

It wasn't always like that, however. Back in 1967, the very first Super Bowl - what we now call Super Bowl I but was at the time called the AFL-NFL World Championship Game - was played at the Los Angeles Coliseum. It pitted NFL champion Green Bay Packers against AFL champion Kansas City Chiefs, and it was an easy win for the Packers, 35-10.

As the video makes clear, it was a very different time in the history of the NFL - a time when football was not yet the national religion of many Americans. There are signs in the short film below of what the Super Bowl would someday become - being in Los Angeles, the game was attended by celebrities - but the atmospherics (marching bands, for example, and plenty of empty seats in the stands) are almost high-schoolish:

The clip is a roughly 22-minute history of the day of Super Bowl I, an NFL Films production narrated by the legendary voice of John Facenda.