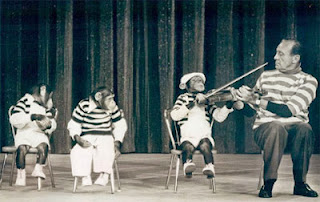 There's a terrific article in the San Antonio Express-News edition of Jan. 7, 2014, written by Hector Saldana, about one of the Rolling Stones' earliest concert appearances in America. Alas, the article is hidden behind a pay wall.

But the gist of it is this: At their San Antonio appearance on June 6, 1964, the Rolling Stones were heckled, booed, hissed, pelted with various objects - and those weren't even the biggest indignities.

What was? They had to follow a trained chimpanzee act onto the stage.

The Stones were in San Antonio in June 1964 to play a series of 20-minute sets at something called the Teen Fair of Texas. They were on a bill that included country music's George Jones and a chimp act that was actually very well-known at the time called the Marquis Chimps.

The Marquis Chimps appeared as guests on early television variety shows, performed in commercials and movies. And, obviously, they did live performances on stage.

They also co-starred (with, among others, Jack Weston) in a sitcom called The Hathaways that ran on ABC from late 1961 through Spring 1962.

And they were regulars on the Jack Benny Show; he continued performing with them for years, even doing a TV special in 1963 called Jack Benny and the Marquis Chimps. This is who the Rolling Stones followed on stage in one of their very first American gigs - go to the 38:22 mark in the video:

The clip above is from the Jack Benny Hour, an episode that included Señor Wences and Bob Hope. Make sure you catch Hope's quip at the end of the clip - he made fun of having to follow a bunch of chimps.

Saldana's article Stones bassist Bill Wyman's memoir about the Stones' 1964 San Antonio sets: "Everyone got a poor reception from a mixed crowd of cowboys and kids. We had to go on after some performing monkeys. What the hell were we doing there? People didn't know whether to take us serious or as a joke."

Saldana brings up something odd, though: In Keith Richards' book, he mis-remembers the act they followed as circus seals; then-Stones-manager Andrew Oldham also told Saldana that they followed trained seals. Great examples of how easily malleable memories are.

More of the Marquis Chimps: Here they are in a 1950s-era commercial for Red Rose Tea:

And the following short, titled Monkey Tale, was produced by the New Zealand National Film Unit for the country's Transport Department:

Their June 1964 appearances in San Antonio weren't the only trying gigs for the Stones on their short swing through the United States. They were openly mocked in at least one television appearance by the show's very famous host.

Here's a great look at the Rolling Stones as they appeared in 1964, from an episode of the Dean Martin Show, filmed at the Hollywood Palace. At the end of the song, a clearly unimpressed and disinterested Martin says, "Aren't they great?" and rolls his eyes, which draws a laugh from the crowd: