Orson Welles was not only an amateur magician, he was a man who appreciated fakery of all kinds. One of his final films was F Is for Fake, about art forgery. During his late career, he appeared on or narrated multiple television specials about magic or alleged supernatural phenomena.

So it's no surprised he'd have an interest in psychics. Or, I should say, "psychics." Psychics claim to read minds or speak to the dead, but what they are really doing is reading their client. It's a technique called "cold reading." The only question is whether any given psychic believes his or her own BS or not.

In 1970, long before cold reading became, as it is today, a well-understood technique for "fortune telling" trickery, Orson Welles appeared on The David Frost Show and explained how he, Welles, came to understand cold reading. Not only understand it, but practice it.

Posted by Bogey McDuff at 2:56 PM No comments: 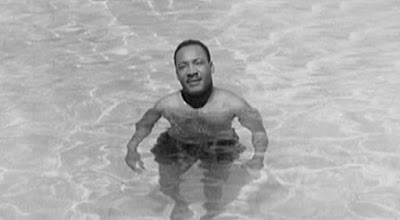 Posted by Bogey McDuff at 8:36 AM No comments:

The IMDB plot summary for the 1955 advertising short called A Word to the Wives is succinct, and accurate: "The story of two women and how they trick a husband into renovating a kitchen."

But it doesn't do this 13-minute mini-film justice. A Word to the Wives features one of the earlier acting jobs in the career of Darren McGavin (who plays the put-upon husband). It was directed by Norman Lloyd. And the star (and doing the voice-over narration) is Marsha Hunt, who was acting in movies and television from the 1930s into the 2000s.

That's the other part of A Word to the Wives that makes it worth watching all these years later: It's a look back (an astounding look back, probably, for people younger than a certain age) at the gender roles and gender attitudes prevalent in the United States in the 1950s. (The film was released in 1955.)

It's not a work of art or anything. But A Word to the Wives is an interesting historical document of the era, and in the careers of (in particular) McGavin and Lloyd.

Posted by Bogey McDuff at 12:55 PM No comments: