What were the songs in that Top 5?

Those five songs alone would be a great career for most bands. The Beatles were just getting started. But they also weren't nearly finished in the April 4, 1964 Hot 100 - the group had 12 songs total in the rankings that week. Take a look at how the Hot 100 looked in print that week (click the image to enlarge): 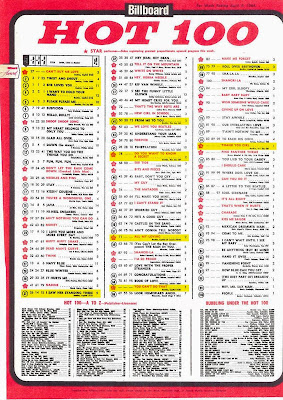 Here are the other seven Beatles songs from that Billboard Hot 100:

But that 12th one - Thank You Girl? You have to be more than a casual fan to know that one. But I've always thought the genius of the Beatles is best understood by listening to the songs they didn't release as singles and buried on early albums. And Thank You Girl is a great little rocker.

It's a true Lennon-McCartney composition (meaning they really did write it together), but one they both treated dismissively in later years. Lennon called it "an effort at writing a single that didn't work" and "just a silly song we knocked off." McCartney called it "a bit of a hack song." That's what high standards do to one's appreciation of one's own work.

No, it's not their best work. But it boasts a howling John lead vocal (double-tracked), a gorgeous Paul harmony vocal (but then, all of Paul's harmony vocals are gorgeous), and a muscular beat by Ringo. And a catchy tune. When work like this is your throwaway, you know you have a great thing going.

Thank You Girl was originally released in England as the B-side to From Me to You. It came out a couple weeks later in the USA as the B-side to Do You Want to Know a Secret, and reached No. 35 on the singles chart.