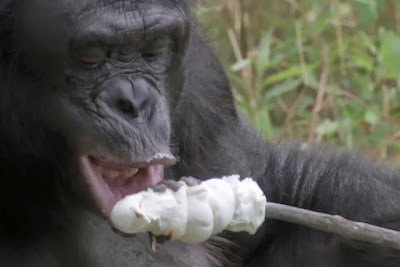 This short video clip is one of the most mind-blowing things I've seen in a long time. It's from a BBC program called Monkey Planet and it shows Kanzi (who is a bonobo, one of the two members of the chimp family) ... well, just watch:

This is how it starts, people. THIS IS HOW IT STARTS! Actually, the opposite is true: Now we know why Planet of the Apes is such an impossible story - they all get diabetes.

Kanzi is remarkable in many more ways that just for his ability to build a fire, strike a match and roast marshmallows. Kanzi is a 34-year-old male who spent much of his life at the Language Research Center at Georgia State University. Kanzi showed an aptitude for understanding language from a very early age, and also for using tools. He understands more than 200 words. He now lives at the Great Ape Trust in Des Moines, Iowa, and has a son born in 2010.

Kanzi's son is named Teco, and appears with Kanzi in this clip:

Alas, Teco, according to Wikipedia, exhibits signs that in humans might be diagnosed as autism or a related disorder.

Here is reporter Lisa Ling "interviewing" Kanzi for a report that aired on Oprah:

Here's another clip of Kanzi building a fire and roasting marshmallows:

The following video shows some of the language research done with Kanzi (and also shows him cutting onions with a knife). "Kanzi's language comprehension has been demonstrated in research using novel sentences — phrases that preclude the learning of specific responses."

There are many more clips of Kanzi on YouTube.