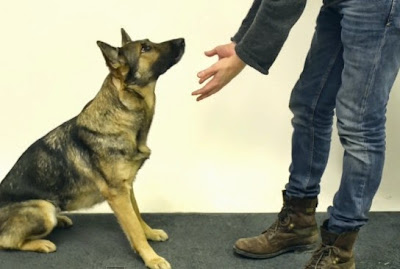 Do dogs appreciate a good magic trick? Well, whether they "appreciate" magic is unknowable - but they certainly react to magic tricks. How do we know? Because magician Jose Ahonen did a magic show for dogs. He palmed doggie treats, then made them disappear. The dogs don't know what to think! Actually, they're probably thinking, "hey, gimme my darn treat!"

I'm just a bit surprised at the dogs' reactions. The magician still has the treats, they didn't literally vanish. Given time, the dogs would probably sniff them out.

As it is, these magic tricks look a lot like simply teasing the dogs. But don't worry! Magician Ahonen stresses that each dog in the videos received a treat before the magic trick, and another one afterward.

Here is Part 2 of magic for dogs: