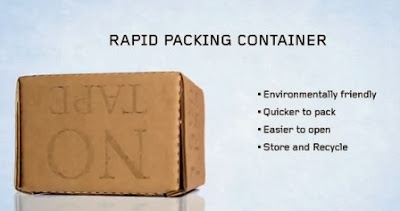 Can you re-invent the wheel? Build a better mouse trap? There are some products out there whose form and function are so settled that you'd think the answer is no. The cardboard box, for example. How could you re-imagine that product in a way that makes it appreciably better?

Brilliantly, two engineering students at the Albert Nerken School of Engineering at Cooper Union, have done just that. Henry Wang and Chris Curro - juniors in electrical engineering - call it the Rapid Packing Container. And they've reimagined the cardboard box from start to finish: the Rapid Packing Container is easier to pack and seal, easier to open, and its design even takes into account after-market use by the consumer. Best, it uses 15- to 20-percent less cardboard than traditional cardboard boxes; also, it doesn't require any tape or stapling to seal.

Who would have thought a short video about a cardboard box could be so interesting? Watch: