Do You See Jesus in that Tortilla?

Facebook page includes an album of photos demonstrating the psychological phenomenon called "pareidolia." That's a fancy word that basically means seeing some random pattern and turning it into something significant. Rorsach tests are examples of pareidolia. But the most famous cases involve people seeing Jesus in a tortilla or the Virgin Mary in a grilled cheese sandwich or their Uncle Morty in a potato chip.

A couple examples from the Skeptical Inquirer gallery, starting with Grumpy Cat in an apple: 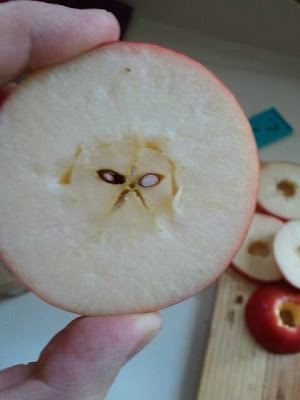 And here's an old man in an iceberg: 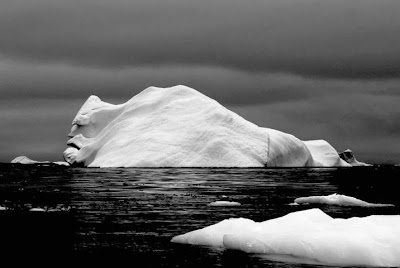 We recognize examples such as the two above as randonmess: light, shape, shadow, and point of view aligning in just the right way to appeal to our human desires to find patterns. We don't imbue such examples as these with religious significance, we don't pretend that there's anything supernatural going on. These are merely accidents. Fascinating ones, but accidents nonetheless.

That changes, however, when the pareidolia involves a person of faith seeing a religious icon in his or her morning bowl of cereal. Then, the viewer might interpret this common psychological phenomenon as a religious experience, an affirmation of faith, a brush with the holy. 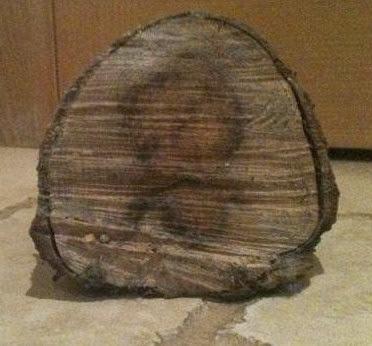 Or the Virgin Mary on the bottom of a turtle shell: 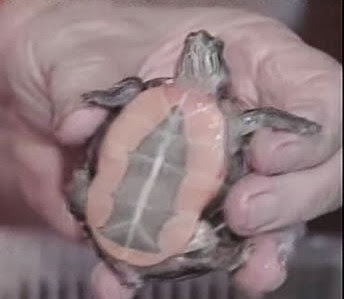 Wikipedia explains Carl Sagan's belief about the origina of pareidolia:

Carl Sagan hypothesized that as a survival technique, human beings are "hard-wired" from birth to identify the human face. This allows people to use only minimal details to recognize faces from a distance and in poor visibility but can also lead them to interpret random images or patterns of light and shade as being faces. The evolutionary advantages of being able to discern friend from foe with split-second accuracy are numerous; prehistoric (and even modern) men and women who accidentally identify an enemy as a friend could face deadly consequences for this mistake. This is only one among many evolutionary pressures responsible for the development of the facial recognition capability of modern humans.

However, the author of The Skeptic's Dictionary

offers an alternative explanation for pareidolia:

It seems more likely that the mind is making associations with shapes, lines, shadows, and so on, and that these associations are rooted in desires, interests, hopes, and obsessions.

That makes sense, I think, and also explains why one person can seem something "obvious" in a random pattern while another person sees nothing at all; or why a person who initially sees nothing will suddenly "see" what he is told is "really" there; or why two people can look at the same random pattern - a cloud for example - and see two totally different things.

Whatever the explanation, pareidolia is a very real phenomenon, much more real than any "face" that might show up in your next tortilla. Check out the Skeptical Inquirer album for more great examples.

Labels: On the Web, Science