What is the geographic dispersion of religions in the United States? One way of visualizing that is by creating a map of the most common religions in every county of each state within the USA. And that's exactly what the Association of Statisticians of American Religous Bodies has done. This map was shared on Twitter by Nicholas Thompason (@nxthompson), editor of The New Yorker. You'll need to click on the map to enlarge it in order to get a better view, and to be able to read the key at the lower right: 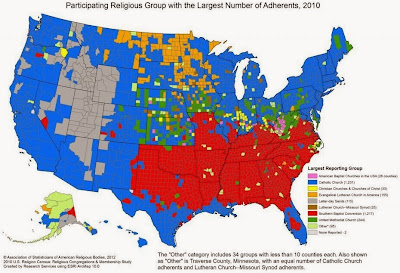 The geographically dominant religion in the USA is easy to spot, it's represented by the dark blue color on the map and is Catholocism. The dark red color dominating the Southern U.S. represents the Southern Baptist Convention. The golden color in the Upper Midwest is the Evangelical Lutheran Church in America, and the dark green banding across the central Midwest is the United Methodist Church. The gray in the Moutain West is Mormonism.