We picked one up at the drive-through and took it home to sample. The price was $1.29. Does the Grilled Stuft Nacho live up to Taco Bell's promises? 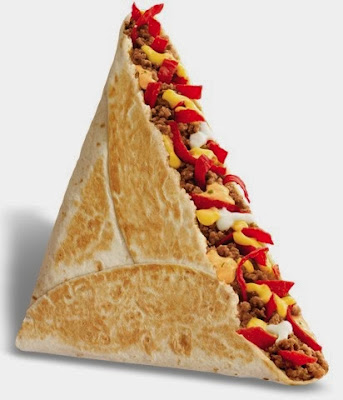 And here's what it looks like in a television ad:

Now, here's what the Grilled Stuft Nacho we ordered looked like: 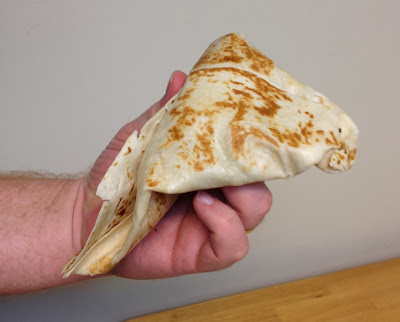 You'll notice it's thinner in reality than in the web/TV images. Also, it's rather ... floppy.

One of potential good things about the Grilled Stuft Nacho is that it looks, in the promotional images, like something you can hold in one hand and easily eat while driving. But I'm not sure that's a good idea, given that it's actually quite floppy and the interior is rather goopy. (We do take into account, however, that our Taco Bell might simply have undergrilled the one they gave to us.) Holding it in the paper sleeve is a good idea to catch any drippings.

The biggest difference between the promotional images and what we bought is thickness. It was much thinner than we were expecting - maybe 3/8 of an inch thick at its thickest point, and about 1/16 of an inch at its thinnest points (around the perimeter where there was no stuffing).

The Grilled Stuft Nacho is flavorful, although the beef is easy to miss. The flavors that really come through are those of the cheese, the sour cream, and the nacho sauce, which has a nice kick to it (zesty, indeed). There's a little crunch from the tortilla strips, although most of them had softened by the time we got home with ours.

It could definitely benefit from a thicker tortilla and more filling, but that would mean boosting the price. One of the selling points is how cheap it is at $1.29. Personally, I would pay more to get something that looks more like that advertising - a thicker, sturdier tortilla that provides more crunch and more bite; and more filling (particularly more beef).

We give the Taco Bell Grilled Stuft Nacho 3 out of 5 stars, which means "average" on the fast food scale; it's good on flavor, but lacking in other areas.

Have you tried it? Tell us how you liked it in comments.