Makin Bacon Doesn't Stack Up
Makin Bacon allows you to cook bacon in the microwave, with the bacon cooking above the fat which has dropped away from it, into a collection dish below.

"Cook bacon better," the packaging exclaims, "above the fat, not in it."

The Makin Bacon, according to the packaging, was invented by Abbey, the smiling little girl whose picture graced the original packaging.

"When I was 8," Abbey tells us in the packaging materials, "I invented the best way in the world to cook bacon. Then my Dad and I went to work and made the Makin Bacon dish. My Mom loves it because it's so much easier. My Dad knows the bacon is healthier. My little sister Kelly doesn't care, she just loves the bacon.

"Please buy it, try it, and tell others!"

Hey, buying it, trying it and telling others is what we do here. So here you go: I sincerely hope Abbey has grown up (the copyright on the packaging is 1996) and gone on to bigger and better things. 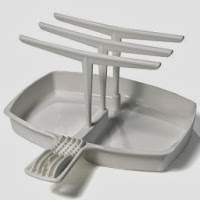 Because "better things" is not a phrase we'd associate with Makin Bacon.

It's a simple enough construction: A plastic dish to which are attached three stems (they kind of look like the old T-shaped telephone poles). Bacon is draped over the arms of the stems, and the whole thing goes in the microwave. As the bacon cooks, grease falls away from the bacon and into the dish below.

You can definitely cook more bacon with the Makin Bacon than you can with a standard stovetop pan or griddle. And you can certainly cook the bacon much quicker with the Makin Bacon, although just how quick is something you'll have to experiment with: there were no instructions or suggestions on cooking time in the Makin Bacon package that we purchased.

The Makin Bacon parts are all dishwasher safe, according to the packaging.

Does the Makin Bacon work? Well, yes and no. It certainly does cook bacon. The question is, how well, and does it cook it to a texture and flavor most people will enjoy?

We can't speak for most people. So speaking for ourselves, the answer is no. The microwaved bacon was rubbery and bland. And those who like crispier bacon are out of luck.

We had a problem in the actual performance of the product, too. The bacon is draped over the arms of the stems. As the bacon begins to cook, it starts dripping grease. This makes the bacon and the stems a little slippery.

Each time we tried the Makin Bacon, we opened the microwave to discover that half the bacon had fallen off the stems and was sitting in the grease that has collected in the dish. Which kind of defeats the purpose.

Some people might find the Makin Bacon useful. It's not something we'd recommend to our friends, though.

Labels: As Seen On TV