How you talk - the specific words you use to describe specific items or situations - says a lot about where you are from. Even within the United States - even within a given state - there are many different dialects.

The New York Times has published a nifty interactive tool in the form of a 25-question quiz based on the Harvard Dialect Survey. At the end of the quiz, a "heat map" shows you the parts of the country where the people speak most similarly to you.

For example, here is a sample question from the quiz: 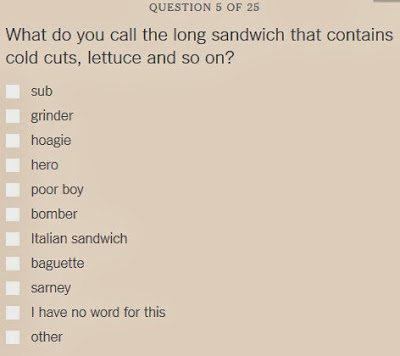 I would use "sub" for such a sandwich, although "poor boy" and "hoagie" are also common where I grew up. The only word for sandwich among the options listed above that I'm not familiar with is "sarney." I think most people will recognize nearly all the options for sandwich.

This question, on the other hand, has some downright bizarre options (remember: the options listed are terms that are actually in use somewhere in the USA): 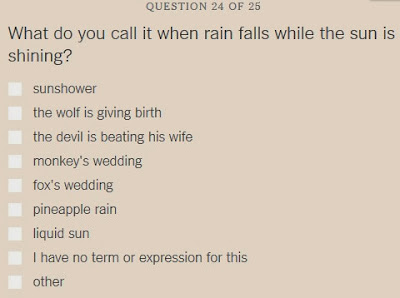 What the ... I've heard this called a "sunshower," but my answer was "I have no word for this." We just say it's raining, whether the sun's out or not.

It's a fun quiz for exactly these reasons: You'll learn words and expressions that are (apparently) common in some parts of the country, but that you might not have heard before. And some of them are funny!

The quiz did not get my location right. It got the region right, but was a couple states too far to the east. I've seen some folks on Twitter saying the quiz pegged their location to the very city. So give it a try.

Labels: On the Web