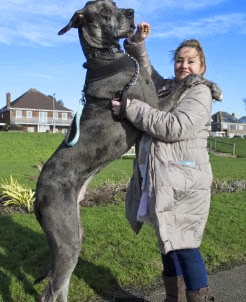 Freddy the Great Dane wasn't even the biggest puppy in his litter. But as an adult? Now that Freddy is 18 months old, he's been measured at 7-feet, 4-inches tall standing on his hind legs, and that makes him the biggest dog in Great Britain, according to Barcroft TV.

Freddy belongs to Claire Stoneman and lives in Leigh-on-Sea, Essex, in England. Claire also owns Freddy's sister, Fleur. According to Claire, she spents £80 to £90 per week on Freddy's food alone. She also spends quite a bit of money on furniture; as the video says, Freddy and his sister have torn up 14 sofas so far.

Freddy hasn't officially been declared Britain's biggest dog yet, but at 7-4 he is significantly taller than the current, "official" recordholder, a 6-foot-6 dog named Samson. Seven-4 is also the size of the official world recordholder, another Great Dane named Zeus. If Freddy grows any more (and if the Guinness World Record folks are called in for an offical measurement) he might be crowned the world's biggest dog.

Here's video of Freddy in action: 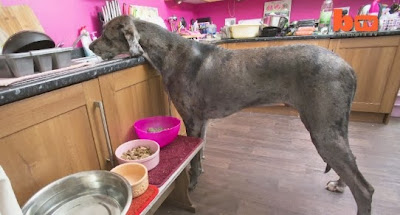