Today, February 20, is the anniversary of the death of Frederick Douglass, one of the giants in American history. Douglass, born a slave in 1818, escaped to freedom in the North, then spent his life working for the abolition of slavery and battling the suffocating effects of racism. Douglass' towering intellect, morality and dignity publicly put the lie to the justifications mouthed by those defenders of slavery and racism, every day until his death in 1895. 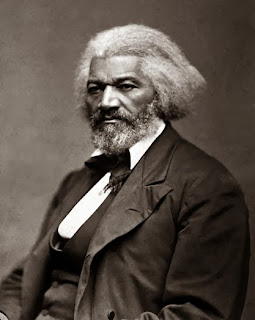 We'll honor Douglass today by presenting actor and activist Danny Glover reading Douglass' speech "The Meaning of July Fourth for the Negro." It's commonly referred to as "the 4th of July speech," but it was actually given on July 5, 1852. That was a time, of course, when slaveholding states made up half of the United States, and when black Americans everywhere, including non-slave states, were denied many basic rights.

Douglass' speech stands as one of the firiest - and greatest - speeches in American history. Part of the punch it packs comes from its relative brevity; Glover's reading clocks in at under six minutes. But most of the punch comes from Douglass' powerful words, written in reaction to being asked to speak in commeration of the signing of the Declaration of Independence.

The speech took place at Corinthian Hall in Rochester, New York, and Douglass wasted no time letting those in attendance know that this speech would be something different. "Do you mean, citizens, to mock me, by asking me to speak today?" Douglass asked.

"Within the now-famous address," says a page on PBS.org about the speech, "is what historian Philip S. Foner has called 'probably the most moving passage in all of Douglass' speeches' " and quotes this section:

"What, to the American slave, is your 4th of July? I answer; a day that reveals to him, more than all other days in the year, the gross injustice and cruelty to which he is the constant victim. To him, your celebration is a sham; your boasted liberty, an unholy license; your national greatness, swelling vanity; your sound of rejoicing are empty and heartless; your denunciation of tyrants brass fronted impudence; your shout of liberty and equality, hollow mockery; your prayers and hymns, your sermons and thanks-givings, with all your religious parade and solemnity, are to him, mere bombast, fraud, deception, impiety, and hypocrisy - a thin veil to cover up crimes which would disgrace a nation of savages. There is not a nation on the earth guilty of practices more shocking and bloody than are the people of the United States, at this very hour."

Here is Glover's reading of the speech:

I wonder what the reaction of those in attendance must have been. But we probably don't have to wonder: They must have been shocked, aghast, that someone would speak such powerful truths to them about the hypocrisy of the country's behavior in relation to the country's foundational document.

For some reason, Glover's reading actually stops short of the full speech; another couple paragraphs conclude with Douglass expressing the hope he somehow managed to maintain for his country. "... Notwithstanding the dark picture I have this day presented, of the state of the nation, I do not despair of this country. There are forces in operation which must inevitably work the downfall of slavery," Douglass said. " 'The arm of the Lord is not shortened' and the doom of slavery is certain. I, therefore, leave off where I began, with hope."

Here is the concluding part of the speech missing from Glover's reading:

Allow me to say, in conclusion, notwithstanding the dark picture I have this day presented, of the state of the nation, I do not despair of this country. There are forces in operation which must inevitably work the downfall of slavery. "The arm of the Lord is not shortened," and the doom of slavery is certain. I, therefore, leave off where I began, with hope. While drawing encouragement from "the Declaration of Independence," the great principles it contains, and the genius of American Institutions, my spirit is also cheered by the obvious tendencies of the age. Nations do not now stand in the same relation to each other that they did ages ago. No nation can now shut itself up from the surrounding world and trot round in the same old path of its fathers without interference. The time was when such could be done. Long established customs of hurtful character could formerly fence themselves in, and do their evil work with social impunity. Knowledge was then confined and enjoyed by the privileged few, and the multitude walked on in mental darkness. But a change has now come over the affairs of mankind. Walled cities and empires have become unfashionable. The arm of commerce has borne away the gates of the strong city. Intelligence is penetrating the darkest corners of the globe. It makes its pathway over and under the sea, as well as on the earth. Wind, steam, and lightning are its chartered agents. Oceans no longer divide, but link nations together. From Boston to London is now a holiday excursion. Space is comparatively annihilated. Thoughts expressed on one side of the Atlantic are distinctly heard on the other.

The far off and almost fabulous Pacific rolls in grandeur at our feet. The Celestial Empire, the mystery of ages, is being solved. The fiat of the Almighty, "Let there be Light," has not yet spent its force. No abuse, no outrage whether in taste, sport or avarice, can now hide itself from the all-pervading light. The iron shoe, and crippled foot of China must be seen in contrast with nature. Africa must rise and put on her yet unwoven garment. 'Ethiopia, shall, stretch. out her hand unto Ood." In the fervent aspirations of William Lloyd Garrison, I say, and let every heart join in saying it:

God speed the year of jubilee
The wide world o'er!
When from their galling chains set free,
Th' oppress'd shall vilely bend the knee,
And wear the yoke of tyranny
Like brutes no more.
That year will come, and freedom's reign,
To man his plundered rights again
Restore.

God speed the day when human blood
Shall cease to flow!
In every clime be understood,
The claims of human brotherhood,
And each return for evil, good,
Not blow for blow;
That day will come all feuds to end,
And change into a faithful friend
Each foe.

God speed the hour, the glorious hour,
When none on earth
Shall exercise a lordly power,
Nor in a tyrant's presence cower;
But to all manhood's stature tower,
By equal birth!
That hour will come, to each, to all,
And from his Prison-house, to thrall
Go forth.

Until that year, day, hour, arrive,
With head, and heart, and hand I'll strive,
To break the rod, and rend the gyve,
The spoiler of his prey deprive --
So witness Heaven!
And never from my chosen post,
Whate'er the peril or the cost,
Be driven.

The full text of Douglass' "The Meaning of July Fourth for the Negro" can be read here on PBS.org.