Fungi-Filled Sloth Hair May Be Source of New Wonder Drugs 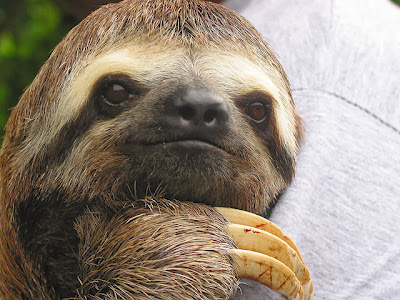 Who's that fella above? He's a three-toed sloth, and he might just be the source of the next wonder drug.

Via DiscoverMagazine.com comes news of recent scientific study, the results of which are published on PLOSOne.org.

Sloth hair, it turns out, is absolutely teeming with fungus, packed to the gills (so to speak) with various forms of fungi. And scientists have been discovering important medical compounds, and turning them into effective drugs, in fungi for about as long as there have been legitimate "medical sciences." So the scientists behind the study started looking around: Where can go next to find fungi to study for possible medicinal applications? Sloths!

They aren't just cute, they could also be medically important. The study is titled "Sloth Hair as a Novel Source of Fungi with Potent Anti-Parasitic, Anti-Cancer and Anti-Bacterial Bioactivity."

The abstract includes this summary of findings:

"Sloths – arboreal mammals commonly found in the lowland forests of Panama – carry a wide variety of micro- and macro-organisms on their coarse outer hair. Here we report for the first time the isolation of diverse and bioactive strains of fungi from sloth hair, and their taxonomic placement. Eighty-four isolates of fungi were obtained in culture from the surface of hair that was collected from living three-toed sloths (Bradypus variegatus, Bradypodidae) in Soberanía National Park, Republic of Panama. ... Seventy-four isolates were cultivated in liquid broth and crude extracts were tested for bioactivity in vitro. We found a broad range of activities against strains of the parasites that cause malaria (Plasmodium falciparum) and Chagas disease (Trypanosoma cruzi), and against the human breast cancer cell line MCF-7. Fifty fungal extracts were tested for antibacterial activity in a new antibiotic profile screen called BioMAP; of these, 20 were active against at least one bacterial strain, and one had an unusual pattern of bioactivity against Gram-negative bacteria that suggests a potentially new mode of action. Together our results reveal the importance of exploring novel environments for bioactive fungi, and demonstrate for the first time the taxonomic composition and bioactivity of fungi from sloth hair."

Sounds promising, and sounds like there is plenty there on which to follow up and explore further.