Living in a valley between mountain peaks virtually guarantees a life filled with beautiful surroundings. We often don't think of, or even imagine, the possible dangers though. In winter, maybe: avalanche. But yearround, rockslides (or mudslides in places like the hills around Los Angeles) are hazards.

I'm not sure I've seen anything like this before: 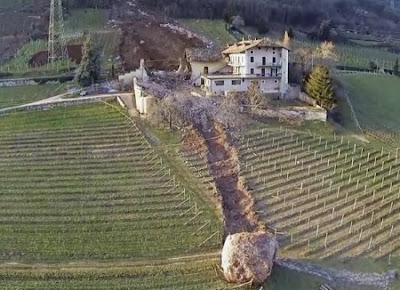 That image is taken from video captured by a drone flyover and posted by Tareom on YouTube. The website MyModernMet.com (which is where we first saw this story, via @DavidGrann), explained:

"On January 21st, a giant boulder was set loose from a mountain in northern Italy by a landslide and proceeded to rip through a 350-year-old stone barn in Ronchi di Termeno (Tarmin). Though no one in the four-person family was physically injured in the natural disaster, the owner of the house and accompanying vineyard, Trebo Herbert, has been left with tremendous damage to his property. In fact, more than one boulder came in contact with the farm, making for a huge amount of destruction."

Here is the 4-minute flyover video that shows us the rock escarpment that loosed the huge boulders, their paths down the mountainside and through the barn, and their resting places:

The property damage is huge, but, thank goodness, nobody was in the barn at the time one boulder destroyed it. Another giant boulder stopped inches short of crashing through the main house: 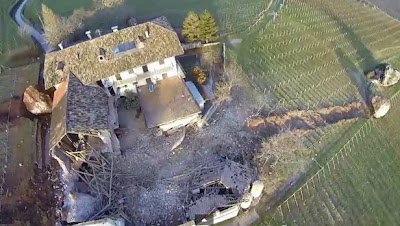 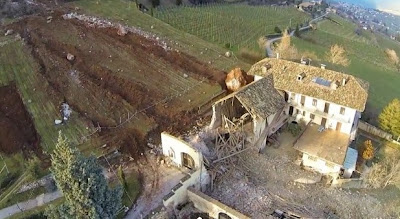 A page has been set up on Facebook for those who wish to help the family recover from this disaster.