In the Round at 'Bowling Ball Beach' 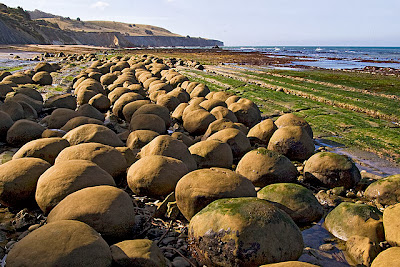 What forces can deposit spherical boulders on a beach without anyone noticing how they got there? No, not mysterious forces - geological forces.

The round (and round-ish) rocks of Bowling Ball Beach can be viewed within the confines of Schooner Gulch State Beach, on the Pacific Ocean, near Mendocino, Calif. If you want to get a great view of the "bowling balls," you'll need to plan a visit to coincide with low tide.

(Note that the three photos on this page are found on Flickr and used here under a Creative Commons license.)

The California Parks Department website describes Schooner Gulch State Beach - a k a, Bowling Ball Beach - this way: "The beach and headlands preserve a scenic spot along the Mendocino Coast and offers a stunning perch for watching sunsets, or merely sitting in the grass as the afternoon sun glistens on the waters below. Fishing, picnicking, and surfing are popular activities here."

And while the sunsets over the Pacific Ocean are spectacular, it is the odd rock formations at water's edge that bring this beach its fame. What causes these spherical rock formations? The processes of concretion and erosion. 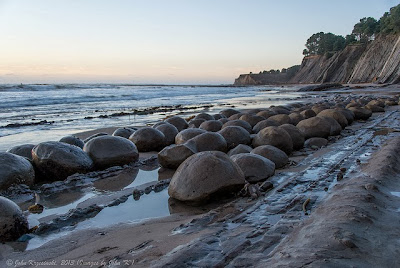 "A concretion is a hard, compact mass of sedimentary rock formed by the precipitation of mineral cement within the spaces between the sediment grains. Concretions are often ovoid or spherical in shape, although irregular shapes also occur. The word 'concretion' is derived from the Latin con meaning 'together' and crescere meaning 'to grow'. Concretions form within layers of sedimentary strata that have already been deposited. They usually form early in the burial history of the sediment, before the rest of the sediment is hardened into rock. This concretionary cement often makes the concretion harder and more resistant to weathering than the host stratum."

Then, if the "host stratum" - in this case, the beach cliffs - is eroded away over time, the ovoid concretions are revealed. And someone comes along and says, "Hey, those rocks look like bowling balls!" And then you have Bowling Ball Beach. 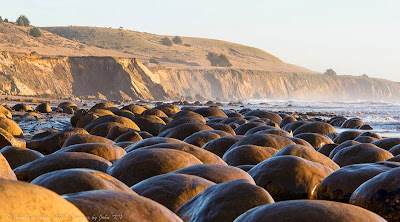