Nobody likes having to relieve themselves in a public restroom. They are often (particularly if they are men's bathrooms) disgusting and carry awful odors. What if there was a way to combine bladder relief with odor relief while also adding some green space to the public sidewalk?

There is! It's called the PPlanter, and it's a public restroom (for urinating only - no No. 2 here) that doubles as a planter or garden. It works by filtering the, well, pee-pee of patrons into a bamboo planter; the bamboo then does its own filtering job and releases clean water back into the environment. The process eliminates urine odors while adding greenery to the public scene.

On its website, PPlanter.com, the unit is described as "a rapidly deployable, reconfigurable public urinal and sink that uses modular biofilters to treat urine and wastewater." Here is a more in-depth description of how the PPlanter works:

This is what the PPlanter unit looked like during a public trial in 2013: 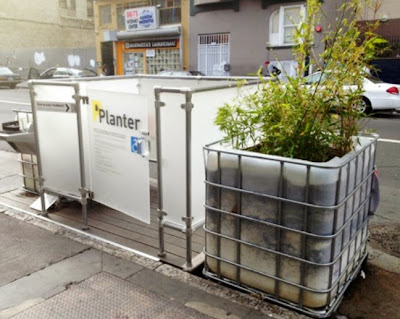 The concept is great, but there are a couple obvious issues: The PPlanter as pictured doesn't provide full privacy; also, it offers a urinal only, so women would have to use a specially designed, provided funnel to pee standing up. Those issues will have to be addressed before the PPlanter would ever gain widespread use. But it's very early days in the PPlanter's design.

You can read more about the PPlanter on Gizmodo.