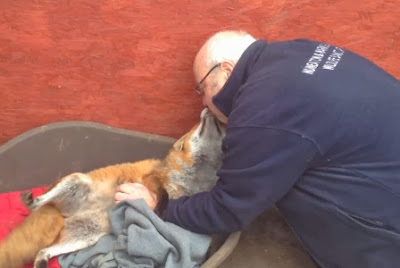 The red fox in this video is named Dawn, and she lives at the Nuneaton and Warwickshire Wildlife Sanctuary in England. Why does she live there, instead of in the wild where red foxes belong? As a young fox, Dawn was scooped up by a well-meaning person who mistook her for a stray dog, and taken to a dog rescue center. The folks there, recognizing her as a fox, transferred Dawn to the wildlife rescue center.

The wildlife center, as it explains on its YouTube page, has a goal of returning its animals to the wild. However, Dawn was already socialized by the point the sanctuary received her, and so will continue living at the sanctuary.

And the sanctuary cautions anyone who watches this video and thinks, "wow, I'd like to have a red fox as a pet!" - "Dawn is not a pet, and we do not recommend any fox or wild animal as a pet."

She may not be a pet, but she's awfully cute, especially when getting a belly rub:

I bet Redd Foxx loved getting belly rubs, too.