Here is friendly, cuddly tiger Jonas making the rounds of his handlers' living room, trying to get some pizza, asking for neck rubs, licking the guys' heads, and curling up on the couch:

The video was posted by Kevin Thatcher, who wrote, "This is how Bowmanville Zoo does it. We love our animals just like family."

Jonas the Tiger was a star attraction at the Bowmanville Zoo, a private zoo east of Toronto, and also a movie star: Jonah was the tiger in the movie Life of Pi. "In the movie whenever you see a tiger close to the actor, or a non-aggressive tiger, that's Jonas," Michael Hackenberger, owner of the zoo, told the Toronto Star last year.

Alas, Jonah is no longer with us. From the Star:

On a warm summer day a few months later, the usually healthy, active tiger became distressed and unable to breathe properly. The zoo veterinarian did exploratory surgery and discovered Jonas had a previously unknown birth defect—a large hole in his diaphragm which his liver had passed through; it was pressing into his lungs. Jonas died on the operating table.

"It was very tragic. He was a wonderful, wonderful tiger," said Mr. Hackenberger. "He was the first tiger my son had ever trained. He was 13 (when Jonas died). I looked up and my son was gone. I ran out and he was walking along Hwy. 2 just bawling."

Jonas, aged four, had been at the Bowmanville Zoo since a few weeks after he was born. He was an unusually social tiger who would go home with the staff and play with their dogs.

That is what we see in the video above. 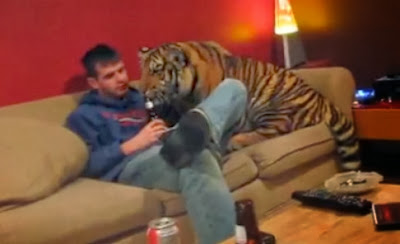