It's Presidents Day in the United States, and let's celebrate by explaining this tweet from presidential historian Michael Beschloss:

Beschloss references President John Tyler's father, who was born in 1747. The president's father was John Tyler Sr., who was a college buddy of Thomas Jefferson, and served in the Virginia House of Delegates with Benjamin Harrison V, whose own son, William Henry Harrison, became the 9th president of the USA.

John Tyler was William Henry Harrison's vice president, and became the 10th president of the USA upon Harrison's death in office. 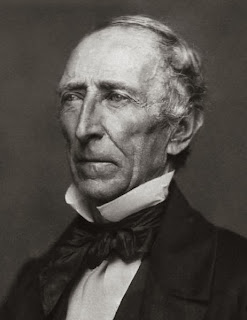 That's a span of 224 years, yet President Tyler still has grandkids who are with us. Amazing. How can that be? Well, as you can probably guess, it involves Tyler himself plus one of Tyler's children siring kids in their old age.

President Tyler had 15 kids (most of any US president), eight with his first wife and seven with his second wife. Tyler served as president from 1841-45. The last of Tyler's children with his first wife was born in 1830. That first wife, Letitia Christian Tyler, died during Tyler's presidency. Letitia was 51 years old at the time of her death, which makes her the youngest First Lady to die.

One of John and Julia's children, Lyon Gardiner Tyler, was born in 1853. John Tyler was 63 years old at the time. Lyon Tyler was also married twice, and had children with both his wives. Lyon married his second wife in 1921, when he was 68 years old. Lyon fathered three children with his second wife: Lyon Gardiner Tyler Jr., Harrison Ruffin Tyler and Henry Tyler. Henry Tyler died in infancy, but Lyon Jr. and Harrison Tyler are still alive today, as of 2014.

So, here's how you get from President Tyler to 2014 in the the span of grandchildren: