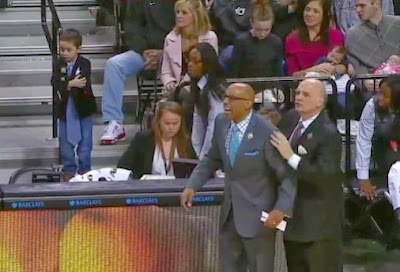 Phil Martelli is the head coach of the St. Joseph's University men's basketball team. He's a dapper fellow, with a dark blue suit and a handkerchief tucked into his jacket pocket. On the sidelines, he's quite animated, as many basketball coaches are: jumping up and down, pointing, yelling at players and officials, pacing back and forth, using a whiteboard to diagram plays.

But who's that little kid on the left of the image above? That Phil Martelli's grandson. And he likes to imitate grandpa during games. So the 4-year-old kid shows up wearing his own suit, with a tie that nearly reaches the floor, and his own kerchief-in-the-pocket. He, too, jumps up and down during games, paces the floor, and even whips out his own whiteboard in imitation of his grandfather.

The tyke is named Philip, after his grandpa. And because St. Joseph's is the champion of the Atlantic-10 Conference, they are going to the NCAA basketball tournament. Expect little Philip to get lots of screen time during St. Joe's games.