Bear Tries Climbing Rope to Get a Meal, Gets Laughed at Instead 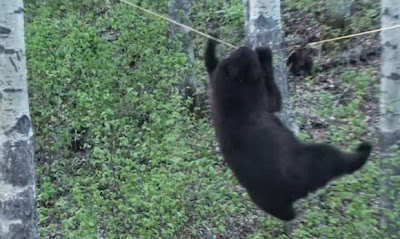 This black bear was hungry, and he spotted a sitting duck (or sitting beaver, anyway). Only problem: the dead beaver was tied to a rope stretched between two trees, left by hunters either as a) bait; or b) as a way to keep their kill away from bears. But the bear wasn't deterred. First, he scooted up a tree. Then, he reached out, took hold of the rope, and set off toward the beaver.

The hunters watching and filming the scene were amazed and amused. Their laughter as the bear gets stuck hanging from the rope is the soundtrack for this clip:

The bear was unharmed by his fall. But he didn't get the beaver, so he was also still hungry.