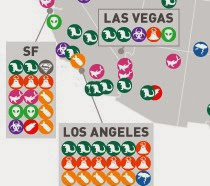 The website The Concourse has one of the most fun maps I've seen in a while: it shows the entire United States and which parts of America have been destroyed in Hollywood movies - and how those places were destroyed. The small excerpt from the map at the left gives you a taste of it. Check out the full version.

The map even allows you to sort by type of disaster: Want to know which cities were obliterated by comets or asteroids? You can do that! You can also sort by sharknado (!), monster attacks, creature attacks, climate events, geologic events, infections, alien attacks, superhero battles, or good old-fashioned countries attacking countries.

So, for example, I learned that in a 1957 movie called The Giant Claw, a monster destroyed New York. And that a 1950 movie called Panic in the Streets results in the destruction of New Orleans via infection.

The mapping of destruction has never before been fun.

Labels: On the Web