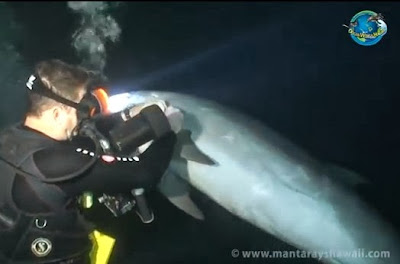 This dolphin had a problem: It was a tangled in fishing line, one of its pectoral fins pinned against its body, and had a hook in it. Then the dolphin spotted a group of scuba divers watching manta rays.

So what did the dolphin do? It swam over to the people and showed them the problem, as if it was asking for help. And one of the divers did help - he approached the dolphin and began working to extricate the fella from his predicament. One mammal helping another. The dolphin even remained relatively still as the diver worked, even when the diver had to pull out diving scissors to finish the job.