It's the Thought: Little Boy Thrilled to Receive a Banana as a Gift 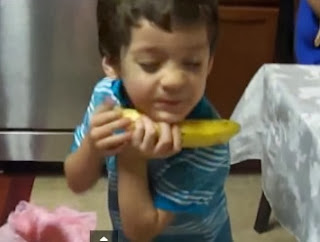 I'm told that once, as a small child, I opened a gift and sniffed, "Just what I always never wanted!" Kids say the darnedest things. I would not have been happy to open a present only to find a banana inside.

But the little boy in this video? He has the right attitude. He's is overjoyed to receive a banana, and his reaction is nothing short of joyful.

The video was posted to YouTube by Vanessa Aparicio, after her "banana kid" vine of the scene originally drew attention. She writes:

"It was mothers day and all the moms had opened up their gifts and he felt left out so we decided to prank him and put a banana in one of the gift bags. We excepted him to get mad but this was his reaction lol"