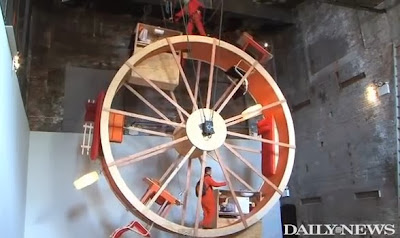 Performance artists are weird. These two are named Ward Shelley and Alex Schweder, and they have decided to live on a human hamster wheel. Here's how the New York Daily News described the project on YouTube:

Artists Ward Shelley and Alex Schweder live in a giant 20 foot diameter human hamster wheel in Williamsburg, Brooklyn, as part of their 10 day performance art piece 'In Orbit' to examine the relationship between roommates, space, and reliance on partners.

But when one of the artists needs to, say, relieve himself, they both have to walk the wheel in tandem in order to bring the toilet to the one who needs it.

What's the point of this display? Schweder, the one living on the inner surface (and so the one who is always at the bottom of the wheel), says in the video:

"One of the things that we're thinking about while we're in here is how buildings, apartments, construct relationships. ... They make relationships just by the nature of their layout, right? And in this particular layout, I'm living with someone but I don't have a common space with him where we can have a conversation, but that doesn't mean that we are not, sort of, collaborating because every time I want to move he has to move."

"The trust issue, for me, is the challenge," says Shelley, who is the one living on top (the outer wheel). "It's a combination of my disability up here, my lack of power, and my need for him, and they are hand-in-hand."