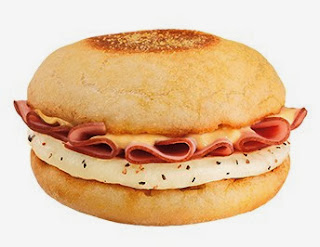 All of those elements are there in the Dunkin' Donuts version (the egg is the typical fast food version, rather than poached), but it's a put-together sandwich rather than open-face.

I enjoyed the one I tried, but there was one issue: not enough Hollandaise. Basically, what I had was a ham and egg sandwich on an English muffin. A good one - the ham and egg were tasty, the muffin was flavorful and very nicely toasted.

There just wasn't enough Hollandaise. There was so little that the sandwich barely had any of the expected tang. If my Dunkin' Donuts gets a little more liberal with the Hollandaise sauce, then I think they'll have a real winner with the Eggs Benedict breakfast sandwich.

Have you tried one? Share your thoughts in comments.