Quiznos Bankruptcy Reminds of Some of TV's Weirdest Commercial 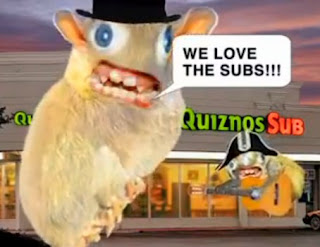 News that toasted sub chain Quiznos has filed for bankrupty brings back memories. Not memories of eating at Quiznos - I've never been a big fan - but of some of the weirdest commercials in TV history.

Remember them? The Quiznos "hamster commercials"? They featured one or two of what most people believed were hamsters (but were actually referred to by the ads' makers as "spongemonkeys"), but with giant googly eyes and with a humanish mouth replacing their own mouths. One "hamster" strummed a guitar while the other sang mostly absurdist lyrics in a grating, awful, high-pitched voice. It was one of those so-bad-you-can't-turn-away efforts at advertising.

And they worked! Those strange ads generated a lot of publicity for Quiznos, which was riding high at the time with plans to challenge sub sandwich leader Subway. Those plans later crashed and burned, as we now know. But the commercials live on.