It's sometimes amazing, often humorous, occasionally disturbing to look back at what was published in newspapers of long ago. Take, for example, this anti-cat screed published as a letter to the editor in 1914 in the New York Times: 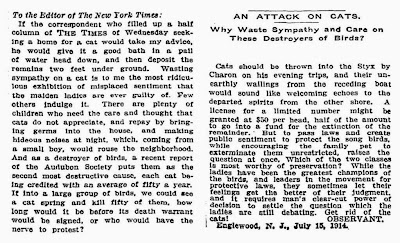 You can click the image to enlarge it for readability. Suffice it to say the letter writer is angry that cats kill birds, and urges that cats themselves be killed. Perhaps at $50 per head. Perhaps by drowning.

Tough to imagine anything of the sort being published today, at least anything so brutishly frank.

What is it about cats that incites such hatred in some people? There are folks who don't like dogs, too, but you rarely hear such violent antipathy directed at dogs. Perhaps it's the independence of cats, the aloofness, the fact that cats can take or leave us.

Oh well. Those who hate cats simply open the door for those of us who love cats to enjoy them even more.