You might not believe it at first, but this is a photo of Marilyn Monroe: 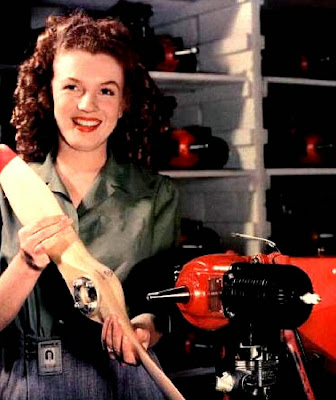 The year was 1945, as World War II raged on. Monroe, whose legal name at the time was Norman Jeane Dougherty, was working in the Radioplane Munitions Factory at the Van Nuys Airport in California. The plant made what today we would call drones, but at the time were referred to as radio-controlled aircraft, or "radioplanes." The small planes were used for training anti-aircraft gunners.

Monroe was 19 years old at the time of the photo. Her husband, James Dougherty, was serving in the Merchant Marines. Coincidentally, just by working in that factory Monroe was already closer to show business, although that wasn't something she was thinking about at the time. The factory was owned by actor Reginald Denney, who, it turns out, was a pioneer in the area of radio-controlled model airplanes.

Given the factory's proximity to Hollywood, it was natural that the Army Air Force's 1st Motion Picture Unit, made up entirely of film-industry people, would eventually get around to shooting photographs or film at that location. And they did. In 1945, Captain Ronald Reagan of the 1st Motion Picture Unit dispatched photographer David Conover to the Radioplane Munitions Factory.

And that's where Conover "discovered" Norma Jeane Dougherty, and took the photo above. The photos Conover took of Monroe were ostensibly for Yank magazine, but were never published. But Conover told Norma Jeane she should consider modeling and recommended she apply to the Blue Book Modeling Agency. Norma Jeane soon signed with the company, started getting regular work, became a popular model, soon landed a studio contract, and the rest, as they say, is history. Norma Jeane became Marilyn Monroe (including changing her original hair color to blonde), and one of the biggest stars in the world.

This wasn't the last time Marilyn Monroe worked in the defense industry, though. In the 1950s, Monroe was issued a Department of Defense identification card so that she could travel on USO tours to entertain troops during the Korean War. By that point, Monroe was married to baseball legend Joe DiMaggio. 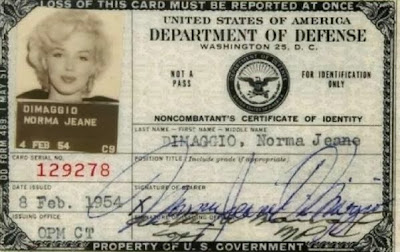