Guinea Pig Suit of Armor Sells for Thousands on eBay

Hey, guinea pig owners, isn't your little piggy missing something? Isn't there something you could buy for him (or her) that would makes its life so much better? Like, say, its very own guinea pig suit of armor? 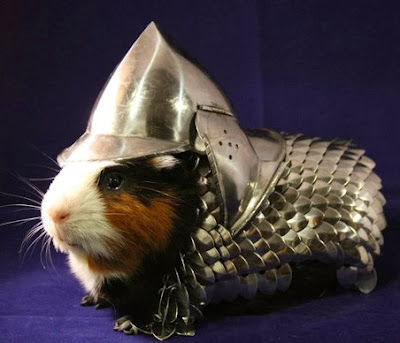 The above photo accompanied an auction on eBay run by seller mightys0x. The chain mail suit was, according to mightys0x, "hand made and is in great condition. The helmet was purchased and is also in great condition." The auction closed with a winning bid of $1,150.

Why, WHY, would anyone make a suit of mail for a guinea pig? And why, WHY, would anyone spent more than a thousand dollars to buy one? It was a charity auction benefiting Metropolitan Guinea Pig Rescue, a Virginia group whose purpose "is to rescue, rehabilitate, and find new homes for guinea pigs in our area. We also work to educate the public on the proper care of guinea pigs. All guinea pigs are spayed and neutered, health permitting, before the animals are adopted into new homes." The auction was run through eBay's Giving Works charitable program.

According to seller mights0x, the hamster in the photo is named Lucky. Or was named Lucky, rather, as, alas, Lucky is no longer with us (which is why Lucky's suit of armor is available). Lucky pretty much only wore the mail when he "reluctantly" posed for photos in it, according to the seller.

The seller's listing was written with a sense of humor:

"Is your pet guinea pig tired of wandering around the house unarmored and vulnerable? Do they get picked on by other guinea pigs? Has your guinea pig ever wanted to go with you to a Renaissance Faire but had nothing to wear?

"Fear not! A solution is here!

"This hand-made scale-mail and tiny steel helmet will keep you guinea pig protected and secure in all situations. The scale-mail is made from polished steel scales and steel rings. It was painstakingly "woven" by me over several weeks in an effort to better prepare my guinea pig Lucky for the dangers of the modern world. The helmet was purchased at a Renaissance Faire later as it was the perfect finishing touch."

The wonders of eBay.