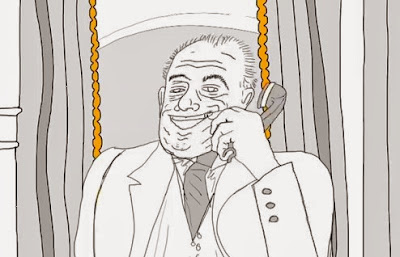 President Lyndon Baines Johnson was notoriously uncouth. There are tons of stories about LBJ's off-color (some would say disgusting) vernacular. One such example is legendary: The time LBJ ordered pants. You wouldn't think that a recording of a president ordering pants could be so funny, but LBJ makes it so.

In 1964, with the White House recording system running, LBJ phoned the Haggar pants company and spoke to Joe Haggar, to order several new pairs of pants. And the president gave Mr. Haggar very anatomically correct instructions - he needed more room "down where the nuts hang," LBJ said. President Johnson refers to his "bunghole" and, at one point, belches - and keeps right on going, neither excusing himself nor apologizing. It's quite a show.

Luckily, this phone call was preserved forever by the White House recording system and, later, by the LBJ Presidential Library. The audio clip below has been animated by Tawd Dorenfeld for the website Put This On. PTI then placed the resulting video on YouTube: