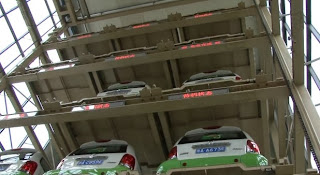 A remarkable type of vending machine is in operation in China: one that dispenses automobiles.

A Chinese company called Kandi Technologies Group is pioneering the automobile vending machine, through which residents of the city of Hangzhou can rent an electric vehicle for one hour for (at the time of this writing) $3.25 per hour.

The auto vending machines are actually large, multi-story garages filled with electric cars. Registered customers swipe a card to request a car, and giant pneumatic machines and conveyances inside the garage deliver the car.

The buildings are known as "EV CarShare garages," or "Kandi machines" ("candy machine" - get it?).

Documentary filmmaker Aaron Rockett recently shot an 8-minute film on Kandi's EV CarShare garages that goes into the idea, the execution, the inspiration (hint: Chinese cities are drowning in pollution produced by industry and gas-combustion engines) and the support the company is getting from the Chinese government.

It's a fascinating idea, and great reporting by the filmmaker (who discloses that he owns Kandi stock, by the way - the company is traded on NASDAQ under the symbol KNDI). Watch:

Kandi's plan is to build with both Government and "outside" support, 750 of these garages in just the City of Hangzhou over the next four years through a 50-50 joint venture with Geely Automotive, China's largest passenger automaker, which would require some 100,000 Kandi electric vehicles to stock them. This model is slated to spread to other cities and regions like Shanghai, Shandong, and Hainan. Two garages were just completed in Hangzhou over the past two months and another 18 are currently under construction as of two weeks ago.

The Chinese government is subsidizing the EV industry to the tune of $65 billion per year, according to Rockett's film.

Once multiple EV CarShare garages are built in a city, Chinese consumers will be able to "check out" a car from one "Kandi machine" and return it to a different garage. 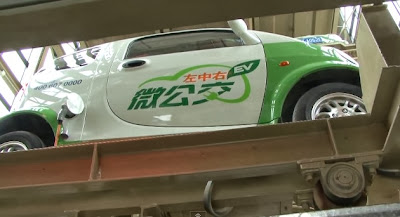