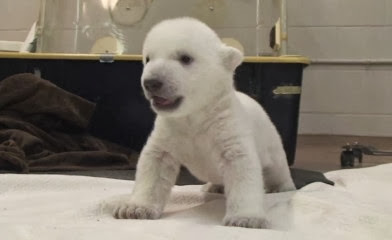 The Toronto Zoo has a new polar bear cub, one that was born on November 9, 2013, along with two siblings. Sadly, the other two did not live past 48 hours. On November 11, 2013, the surviving cub began showing ominous signs of poor health itself. So the zoo made the decision to take it away from its mother and transfer it to intensive care.

It's still touch-and-go as to whether this cub will survive, but its chances are definitely looking up. The Toronto Zoo posted this update:

We are happy to report that the surviving cub is making progress. His coat is gradually becoming thicker and he continues to grow stronger each day. Despite the fact that his eyes will not open until 40 days after birth, other milestones have been passed. He began showing his contentment by purring on November 15th, crawling on November 17th and rolling over for the first time on November 23rd. The cub remains in a temperature controlled environment and enjoys seven feedings per day, each followed by an exercise session to help his growth and development. At the present time he is becoming more active and mobile, and is asserting his personality by growling and calling to staff. While it still remains day-to-day with a cub so young, the team remains hopeful with this small survivor.

Here is the cub taking his first steps:

Here he is feeding from a bottle:

Here his his first time eating from a dish:

Here he is, even younger, trying to explore: