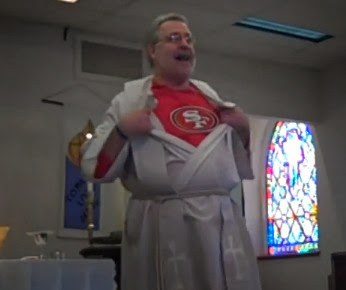 This pastor takes his football seriously. So seriously that he gives a sermon of about 45 seconds so that he can make the kickoff of the 2014 San Francisco 49ers-Carolina Panthers playoff game. According to the YouTube uploader:

The video was uploaded by John Christensen, who we'll guess is the son (or at least a relative) of the pastor in the video. At least this pastor has his priorities right!

The pastor's faith in his 49ers was rewarded, too: San Francisco won the game.