Playing with Food: Artists Create Dioramas on the Dinner Plate

What's going on in this photo? Those little guys look like they are pumping up raisins to turn them back into grapes! 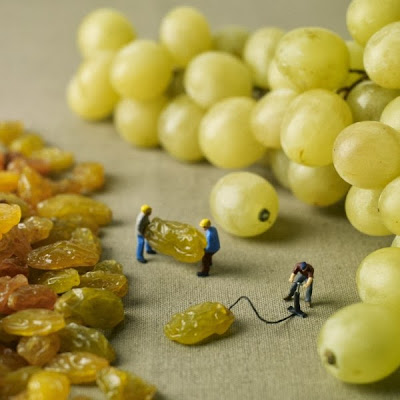 These cool and interesting dinner-plate dioramas are the work of photographers Pierre Javelle and Akiko Ida, who use small figures from model sets to create interesting dioramas using food. They call it the MINIMIAM series, and they've been at it since 2002. You can view more images on the MIMIMIAM website. Such as this one, of sculptors creating art out of shelled peanuts: 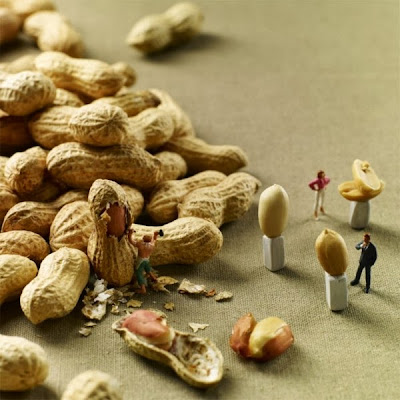 You can also view more on Wired.com, which wrote about the series:

The series, which began in 2002, includes more than 60 diptychs. The first of each pair shows a close crop on a strange or funny scene playing out on unfamiliar terrain. The second image zooms out to reveal its culinary context, often inspiring a chuckle through a watering mouth. The figurines are 1/87 scale — the popular HO model train scale — purchased from hobby shops. “They are about 1.2 cm (0.47 inches) tall, and it would be very difficult for us to manufacture the figures with the detail you see in our images,” says Javelle.

The project grew from the couple’s shared childhood interests in food and tiny things. Javelle cites Ida’s early habit of creating wee comic strips and photographing pieces of food. Javelle grew up enamored by the miniscule pebble garden his grandmother had. “I was fascinated by the composition of the colorful pebbles and tiny bridge,” he says. “This was a mind-blowing landscape that really impressed me.”