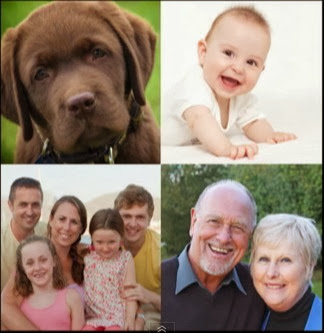 Richard Wiseman is a psychologist who posts many videos, on many different topics, on YouTube. One of his YouTube series is called In 59 Seconds, in which he offers a quick tip or quick explanation or quick demonstration.

The video below poses the question: What one thing can you do that will make it much more likely your lost wallet or lost purse will be returned to you? Wiseman explains that he once, as an experiment, dropped 200 wallets around a particular major city. In each wallet was one of four photos. The four photos are shown above: a puppy, a baby, a family photo, and a pic of an older couple. Did the type of photo in the wallet influence the likelihood of getting his "lost" wallet back?

Yes, one photo was a clear winner. You probably already guessed it: the baby. The wallets that included the baby photo were returned at the rate of 88 percent.

Moral of the story? Start carrying a photo of a cute baby in your purse or wallet, just in case you ever lose it.