Hey, lookee here: It's Fear and Desire, the first feature film directed by Stanley Kubrick, and it's been posted, in its entirety, on YouTube. And now, on Nifty Niblets. It's 66 minutes long, and you can watch it now if you're in the mood for a little film history:

Kubrick, of course, went on to achieve the status of "legend" (or "film icon," if you prefer), directing such masterpieces as Dr. Strangelove and 2001: A Space Odyssey (not to mention Paths of Glory and Barry Lyndon and The Shining and Lolita and A Clockwork Orange and Spartacus and his very underrated final film, Eyes Wide Shut, to name more). Fear and Desire has fallen out of copyright and is in the public domain.

Kubrick hated his first movie. The individual who posted it to YouTube comments, "Kubrick's attempt at filmmaking as a 25-year-old kid who had just quit his full time job at Look magazine. Includes a five-minute interview with the director about the film." 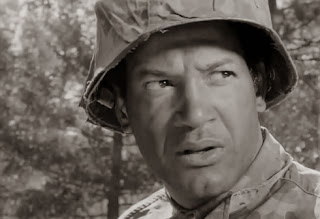 The Wikipedia synopsis of Fear and Desire's plot is as follows:

Fear and Desire opens with an off-screen narrator (actor David Allen) who tells the audience:

There is a war in this forest. Not a war that has been fought, nor one that will be, but any war. And the enemies who struggle here do not exist unless we call them into being. This forest then, and all that happens now is outside history. Only the unchanging shapes of fear and doubt and death are from our world. These soldiers that you see keep our language and our time, but have no other country but the mind.

The story is set during a war between two unidentified countries. An airplane carrying four soldiers from one country has crashed six miles behind enemy lines. The soldiers come upon a river and build a raft, hoping they can use the waterway to reach their battalion. As they are building their raft, they are approached by a young peasant girl who does not speak their language. The soldiers apprehend the girl and bind her to a tree with their belts. One of the soldiers is mentally disturbed. He is left behind to guard the girl but when she escapes he fatally shoots her while shouting about William Shakespeare's The Tempest. A second soldier persuades the commander to take the raft for a solo voyage in connection with a plan to kill an enemy general at a nearby base. The remaining two soldiers successfully infiltrate the base. They locate and kill the general and one of his aides – only to discover the dead men looked exactly like them.

The Rotten Tomatoes rating for the movie is 91-percent, but the IMDB rating is only 5.7 out of 10 stars.

The New York Times reviewed the movie at the time of its release in 1953, and foresaw Kubrick's coming brilliance. The opening paragraph of the Times review is this:

The need for encouragement of fresh talent and its fairly common concommitant, the audacity of youth, was never made more pointed than in "Fear and Desire," the drama fashioned by a tiny group of young, independent film makers, which arrived at the Guild Theatre yesterday. For, in essaying a dissection of the minds of men under the stress of war, Stanley Kubrick, 24-year-old, producer-director-photographer, and his equally young and unheralded scenarist and cast, have succeeded in turning out a moody, often visually powerful study of subdued excitements.

Fear and Desire, the Times concluded, "augurs well for the comparative tyros who made it."