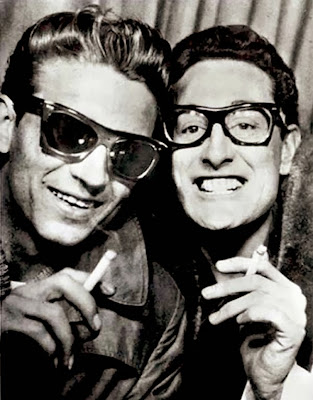 In early 1959, Holly and the Crickets were touring as part of the "Winter Dance Party." Here is the poster for the tour's Feb. 2, 1959 stop in Clear Lake, Iowa: 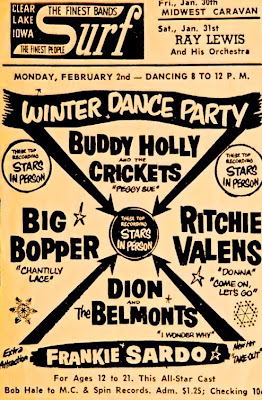 After that show, Holly chartered a small plane to take him and two others to the tour's next stop in Fargo, North Dakota. The rest of the entourage got on a bus. Jennings was supposed to be on the plane, but gave up his seat to "The Big Bopper," J.P. Richardson. Richie Valens of La Bamba fame won a coin flip to earn a place on he plane. But you know what happened. The plane crash that killed Holly, Valens and Richardson went down in history as "The Day the Music Died."

Holly is a giant in rock history; we know that Holly would have continued making great and important music. Who knows what Valens and Richardson might have done had they survived.

But Waylon survived, through a trick of fate. And only through a trick of fate - The Big Bopper had a cold, Waylon felt sorry for him and so let Richardson have a seat on the plane rather than face a long, uncomfortable bus ride - we were able to recognize and appreciate Jennings' own greatness over the ensuing decades.

Here's a song called You're the One; it was written by Jennings and recorded by Holly in December 1958 in the studios of KLLL Radio in Lubbock:

This is a medley of Buddy Holly songs that Waylon sang, in his great baritone, on a 1975 album called Dreaming My Dreams

Waylon performed that medley live at a 1980 Buddy Holly tribute concert in Lubbock with his former bandmates in The Crickets. The 55th anniversary of "The Day the Music Died" is just around the corner.