Behold: The Perfect Bacon Bowl (Because Who Doesn't Want an Edible Bowl Made of Bacon?) 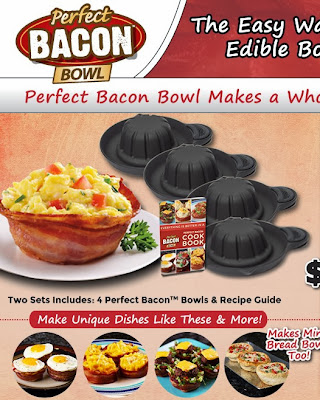 What if you could take some bacon strips, arrange them around a mold of a bowl, cook them up crisp so that they formed a bowl, fill that bacon bowl will other good stuff - maybe even more bacon! - and then ... eat it!

And perhaps the dream of the bacon bowl is here. For - behold! - it's the Perfect Bacon Bowl:

This is an as-seen-on-TV gadget whose infomercial I haven't actually spotted yet. Aside from on YouTube. But once you stumble across something like the Perfect Bacon Bowl, it's hard to turn away.

It's basically an inverted miniature cake mold. You drape and wrap the raw bacon around it, as in this publicity image: 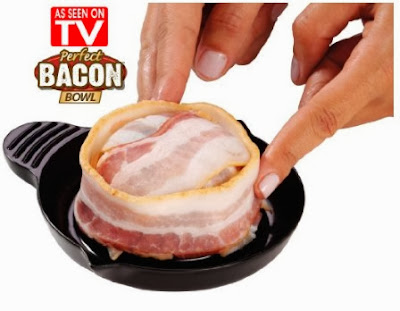 The photo above, by the way, gives you a sense of how small it is. But then you pop it in the oven. The bacon grease drips down the sides of the mold, away from the bacon (settling into the "grease moat"), allowing the bacon to crisp up.

Then you take it out of the oven, invert the mold, and, voila, you have a bowl made of bacon. You have, the product makers would have us believe, the Perfect Bacon Bowl. One that, once you fill it with other stuff, will look this good: 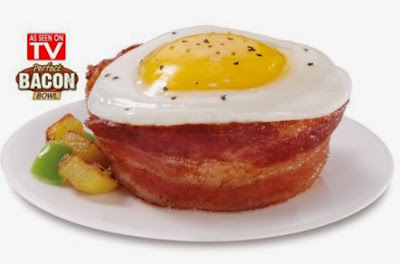 I haven't tried the Perfect Bacon Bowl, but you can bet I'll be on the lookout for one in my local stores' bargain bins.

Have you tried the Perfect Bacon Bowl? We'd love to hear how well it worked.

Labels: As Seen On TV, Food